Why we fall for it every time 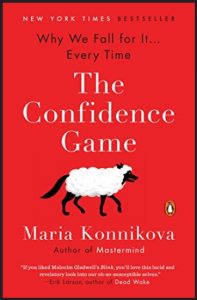 A compelling investigation into the minds, motives, and methods of con artists—and the people who fall for their cons over and over again.

From multimillion-dollar Ponzi schemes to small-time frauds, Konnikova pulls together a selection of fascinating stories to demonstrate what all cons share in common, drawing on scientific, dramatic, and psychological perspectives. Insightful and gripping, the book brings readers into the world of the con, examining the relationship between artist and victim. The Confidence Game asks not only why we believe con artists, but also examines the very act of believing and how our sense of truth can be manipulated by those around us.

They Wanted Something for Nothing

The Many Cons of The Yellow Kid

He was America’s “greatest con man,” self-proclaimed and widely celebrated. But what was the real story of Joseph Weil?

Joseph Weil — most people knew him only by his nickname, the “Yellow Kid” — looked like a wealthy, respectable citizen. The mustache of his neatly trimmed, reddish beard turned up slightly at each end, mimicking the mischievous smile below. The reporters who covered Chicago’s busy criminal courts were always glad to see him, and over drinks he regaled them with stories of his latest confidence tricks.

From ghosts and gods to politics and conspiracies How we construct beliefs and reinforce them as truths.

In this work synthesizing thirty years of research, psychologist, historian of science, and the world’s best-known skeptic Michael Shermer upends the traditional thinking about how humans form beliefs about the world. An extraordinary account of how people at the very edge of death often sense an unseen presence beside them who encourages them to make one final effort to survive.

This incorporeal being offers a feeling of hope, protection, and guidance, and leaves the person convinced he or she is not alone. There is a name for this phenomenon: it’s called the Third Man Factor.

“If you heave an egg out of a Pullman car window anywhere in the United States you are likely to hit a fundamentalist.”
— H.L. Mencken,1927

Malcolm Nance on the Danger of Conspiracy Theories

The former naval intelligence officer Malcolm Nance discusses his fears about the Trump Presidency and whether he believes Trump and members of his circle are foreign agents.

“You are watching a strategic plan that’s being executed by Russia. None of this is piecemeal; none of this is small-time—it is a long ball game.”

“Today, science reporting in the American press is freer of humbug and misinformation than ever before in history.”
— Martin Gardner, 1952

Fads and Fallacies in the Name of Science

The curious theories of modern pseudoscientists This witty and engaging book examines the various fads, fallacies, strange cults, and curious panaceas which at one time or another have masqueraded as science. Not just a collection of anecdotes but a fair, reasoned appraisal of eccentric theory, it is unique in recognizing the scientific, philosophic, and sociological-psychological implications of the wave of pseudoscientific theories which periodically besets the world.

Here you will find discussions of hollow-earth fanatics like Symmes; Velikovsky and wandering planets; Hörbiger, Bellamy, and the theory of multiple moons; Charles Fort and the Fortean Society; dowsing and the other strange methods for finding water, ores, and oil. Also covered are such topics as naturopathy, iridiagnosis, zone therapy, food fads; Wilhelm Reich and orgone sex energy; L. Ron Hubbard and Dianetics; A. Korzybski and General Semantics. A new examination of Bridey Murphy is included in this edition, along with a new section on bibliographic reference material.

Why Some People Are More Prone to Believing Conspiracy Theories

a neuroscientist explains it

Recently, droves of people have hurled themselves headfirst into the rabbit hole of conspiracy theories. While some of the more outlandish theories make for a fun read, many take them completely seriously, declaring that they see a sinister underbelly to everyday life.

Neuroscientist Shannon Odell explains why in this video from Inverse.

The complex relationship between mental health, conspiracy theories, and disinformation that no one’s talking about.

Every day, people who spend time online face a deluge of conspiracy theories, misinformation, and disinformation. Plenty of them move along, clicking past outlandish or false content that’s designed to lure them in. Some, however, become ensnared for reasons experts don’t fully understand. People quickly slip into dark corners of the internet and find a community of believers, or even zealots, who swear they’ve discovered hidden truths and forbidden knowledge.

thoughts on the nature of mass movements “Its theme is political fanaticism, with which it deals severely and brilliantly.” — New Yorker

A stevedore on the San Francisco docks in the 1940s, Eric Hoffer wrote philosophical treatises in his spare time while living in the railroad yards. The True Believer—the first and most famous of his books—was made into a bestseller when President Eisenhower cited it during one of the earliest television press conferences.

Called a “brilliant and original inquiry” and “a genuine contribution to our social thought” by Arthur Schlesinger, Jr., this landmark in the field of social psychology is completely relevant and essential for understanding the world today as it delivers a visionary, highly provocative look into the mind of the fanatic and a penetrating study of how an individual becomes one.

The art and science of remembering everything Moonwalking with Einstein recounts Joshua Foer’s yearlong quest to improve his memory under the tutelage of top “mental athletes.” He draws on cutting-edge research, a surprising cultural history of remembering, and venerable tricks of the mentalist’s trade to transform our understanding of human memory. From the United States Memory Championship to deep within the author’s own mind, this is an electrifying work of journalism that reminds us that, in every way that matters:

We are the sum of our memories.

How books can help us develop our key emotional and cognitive skills.

Why Your Brain Loves Good Storytelling

Your Protagonist, must resonate with a reader.

What that boils down to is creating a sense of empathy on the part of the reader.